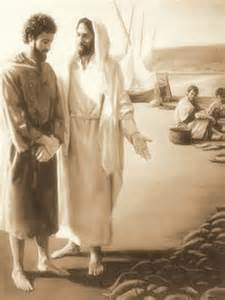 Simon Peter and six of the disciple decided to go fishing. They labored all night and when the dawn broke they saw a man on the shore who called out, “Cast the net to the right side of the boat, and you will find some.”[1] Their catch was so great they could not haul it into the boat. Then one of the disciples recognized the man, “It is the Lord!” he cried.  Peter jumped into the waters and swam toward Jesus while the other disciples brought the boat in. Jesus had prepared a fire and a breakfast of fish and bread for the hungry fishermen.

As the sun rose above the lake shore Simon Peter may have remembered another dawn and the accusations made against him, Surely this fellow also was with Him, for he is a” [2] Three times Peter denied his master that morning and now the fisherman was wondering what punishment his Lord would demand for such a betrayal.

15 So when they had eaten breakfast, Jesus said to Simon Peter, “Simon, son of Jonah,[b] do you love Me more than these?”

And he said to Him, “Lord, You know all things; You know that I love You.”

Jesus said to him, “Feed My sheep.

Simon Peter was a strong-willed and stubborn man who possessed instinctive leadership skills.  He was boisterous, enthusiastic,t hesitate to assert himself on behalf of his friends and even against them.  From his writings and what the Bible tells us, he was not afraid of a challenge and seemed eager to learn and understand the things Jesus was teaching. Peter was far from being a simple laborer, but he dealt with things in pragmatic ways which reflected his life as a fisherman.

There is a sense that this practical man wanted something greater out of life than being a fisherman. He desired to reach beyond his meager life towards something larger and grander and worthy of a man’s effort.  He was a paradox in that he needed to be recognized as a leader but also needed to subjugate his energies to a great cause or worthy person.  He found both in Jesus Christ. Yet his conflicting desire to follow Christ and exert his own leadership would cause discord in his relationship with Jesus. Peter swore that he would die for his savior yet when challenged he turned aside and denied he knew the man at all.

In John’s scripture, Jesus asked Simon Peter three times if he loved him. Jesus did not need to hear the words “Yes, Lord; you know that I love you.”[4] He already knew what lay in the fisherman’s heart. But Peter needed to hear them.  He needed to be reminded what it was that gave his life meaning. “Lord, you know everything; you know that I love you.”[5] This expression of devotion reaffirmed for him why he left his nets and spent three years learning from Jesus. Still each question was like a nail driven through his flesh and with each answer he experiences the bitterness of his betrayal.

Jesus knew that his friend needed healing. He also knew that a simple gesture of forgiveness would not restore this rock upon which his church would be built. Peter needed work; he needed to lead, to stand before the world with a cause bigger than himself. And so Jesus did not offer forgiveness but a task. With each answer, Jesus responded; Feed My lambs, Tend My sheep, Feed My sheep.

For those who didn’t hear my sermon last week, either because you weren’t here or you fell asleep…, I spoke from the Book of Act, chapter 5, verse 27-32. The subject of last week sermon was authority. In verse 29, this same Simon Peter who insisted he did not know Jesus, now stood before the high council who had condemned his Lord and declared, “We ought to obey God rather than men.”[6]  He spoke with an authority which gave him boldness and courage. But it was not his own. It was the authority which comes only from God and which he received from the risen Christ. No one else, not the Sadducee, nor a Roman governor not even Satan himself could empower him with the authority to proclaim the work of God in the world.

Yet on that early morning by the lake, Peter must have felt the Lord was accusing him and that he deserved the indictments. With each answer he felt more acutely the intensity of his unfaithfulness. Greater still was his confusion to understand why Jesus was asking him to tend God’s people. What had he done to deserve this trusted authority to care for the children that Christ had suffered and died for? Was this an opportunity to be redeemed and receive salvation? No! His savior had already done that for him. Why was he being given this authority?

Perhaps not then, but in time Peter understood what his Lord was telling him: If you love me Peter, then finish the work I had begun. Find those who are lost, heal those who are sick, comfortthose who suffer, bring hope to those who have none. By this commandment Jesus gave Peter the authority to do a great and mighty work. Had Jesus not shared those words with him, Peter may have gone back to his nets and would have been no more than a footnote in history. Instead he became the great patriarch of our faith who Jesus declared “on this rock I will build My church, and the”[7] When told to “tend my sheep” Peter was renewed by the love of Jesus to stand boldly before his accusers.

That same commandment is decreed to us today. The authority that once was given to Peter and the apostles is now placed on our shoulders. Most of us would claim, that such authority is meant for remarkable men and women who can bear the weight of destiny and greatness. It is not for those of us who struggle with the daunting task of everyday life. These are the deeds of remarkable people who are distant memories in the pages of a book.  We are not worthy nor are we able to bear such a task. We need to remind ourselves that on that bright clear morning by the lake shore, over the embers of a dying fire, Peter felt the same.

It’s most likely that none of us here will cast as long a shadow through history as Peter. But the authority that Jesus gave his beloved disciple is the same authority he gives us today. And it has not been diminished by time and events. We still have the poor, the sick, the lost and the doubters. Though deprived of the power of death, Satan is still at work in the world.

God did not simply forgive us. As Jesus did for Peter, God does for us. He gives us work to bring knowledge and hope to the world. As Jesus knew Peter needed labor, God knows that we require a worldly task in order to experience the full salvation which His Son gave us on the cross.  By lifting the burden of sin from our shoulders, we have the strength, the foundation and the authority to care and nourish God’s children. And in that work we realize the purpose of salvation and the fullness of God’s love.

It doesn’t matter if we feel worthy of this authority. What matters is that we were made worthy by the blood of the Son. We are empowered with the authority of God through the Holy Spirit to carry on the task which God began in the Son.

On that bright clear morning long ago, by the shores of a lake, a simple question was asked and an answer was sincerely given, “Yes, Lord; you know that I love you.”[8]  Our savior said to Peter and to all who have followed, “Feed My Lambs”[9] and for all of us, hope was reborn. Amen