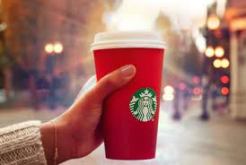 Originally I had intended to write an article about red coffee cups. It would have been a tongue-in-cheek observation of the pseudo controversy surrounding Starbucks conspiracy to undermine the celebration of Christmas. At some point I was going to declare that snowflakes and reindeer on a disposable red cup of coffee does not a Christmas make. And the lack of festive holiday icons will not send Christianity down the path to oblivion and irrelevancy. My climactic declaration was going to be “The spirit of Christmas isn’t what’s found on the outside of a red cup, but what is inside the hearts of Christians.”

Then the attacks in Paris occurred.

The red cups have been forgotten and before the Advent season even begins we are faced with the real threat to the Christmas spirit. The idea that Starbucks intended to destroy Christmas by omitting reindeer from their iconic red cup is ludicrous. The idea that a fanatical group of killers filled with corrupted and distorted interpretations of Islamic doctrines can impose their ideology on the whole world is equally ludicrous. However they cannot be ignored or dismissed. We may be able to boycott Starbucks, as one presidential candidate suggests, but we cannot let this action in Paris go unanswered.

I have to confess the attacks on Paris has made me angry.

I applaud France’s President François Hollande’s declaration of war against the terrorists and his swift retaliation against their bases in Iraq. I believe it is time the world fully commits to dragging these killers from their snake pit and bring them before the court of world justice. These are harsh and provocative words and a Pastor should not make such vitriol and vengeful statements. But as I said, I’m angry.

Hopefully men and women who are wiser in the application of military and diplomatic resources will prevail over my anger. Hopefully they will seek to protect the innocents and let justice be their objective, not revenge and retribution. I pray that their response will be a Christian response. And by Christian I do not mean the prevailing theology of the churches; Protestant, Catholic or Orthodox. A Christian response is one guided by Christ Jesus. This truly calls us to ask “What would Jesus do?” He declared to Peter,” And I also say to you that you are Peter, and on this rock I will build My church, and the gates of Hades shall not prevail against it.” (Matt 16:18) Jesus commanded his followers to tear down the gates and destroy the citadels of hatred and intolerance.

I believe we are warranted in bringing these people to justice. They are power hungry killers who blaspheme their faith and kill more of their own people than non-believing infidel Christians. Their goal is not to spread the teaching of their true faith but to force their own corrupted interpretation of their beliefs on others so they can wield power and authority for their own self-promotion.

Some will agree with me that the .003% of Muslims who are terrorists do not represent the 1.6 billion Muslims who follow Islamic teachings. Others contend that Islamic terrorism is the natural result of a faith devoted to domination and supremacy. I will not debate that issue here. What we need to be concerned with, the issue which threatens our principles and faith, is how we respond to hate-driven acts of world violence.

My Dad’s cousin Earl Albers served in post-war Berlin. Amidst the bombed out city he began to teach a small group of boys how to play baseball. The number of boys grew and soon, with the Army’s permission, he found a stadium unscathed by the allied bombing and hundreds, then thousands of young people who knew nothing but war began to experience what should have been normal youthful activities.  (Click here to read the article)

The Second World War was won with overpowering military prowess and industrial strength by the people of the free world. The Nazi, fascist and imperialist armies of Germany, Italy and Japan were defeated and destroyed. However the death of 60,000,000 people would have been wasted had men, like Earl, and women not reached out to those German youth. Earl was moved by compassion and Christian love, Secretary of State George Marshall knew Europe needed to be rebuilt and initiated the Marshall Plan. General Douglas MacArthur understood that democracy and its ideas had to replace the war creed of old imperial Japan. It was not enough to destroy the armies and leaders of hateful and power driven ideology. It was necessary to kill the idea of hate and intolerance.

Christianity is not threatened by a little red cup void of holiday symbols. Nor will the hateful ideology of criminals and murders destroy what our savior died on the cross to impart. However our indifference toward applying the lessons of compassion and tolerance which Jesus taught will erode and ultimately destroy our faith, leaving a void to be filled with hateful ideas of power hungry thugs. Hell’s gates needs to be torn down, not for the sake of vengeance, but for justice and human compassion. Once destroyed, hate must be replaced with universal values that are at the roots of our Christian faith. If we fail in sowing these ideas then the victory of the battlefield will also be lost. Instead of learning baseball from an American Army sergeant, those German youth would have become the next generation of Nazis.

The complexities and dynamics of the Middle East are beyond my comprehension and the solutions are not simple ones. Military action would cost countless lives and a long term commitment in an area that has seen conflict since before the beginning of recorded history. The task of world leaders is monumental and they need our prayers regardless of our own political beliefs. Perhaps we need to win a military victory and utterly destroy not only the armies of hate but the ideas of hate as well. Then we may plant the values and principles which Jesus taught and by which we, a Christian nation, are suppose to live.

Advent begins with the tragic death of innocent people. Many are filled with anger and bewilderment. Decorations on a red cup seem trivial and the world has more reasons to view religion, of any faith, with distrust. The birth of Jesus was an act of love from God. We need to remember this and to witness to the world what God the Father intended for his children by the birth of God the Son into our midst. Among the teaching Jesus gave to his disciples is the commandment to: “… love your enemies, do good, and lend, hoping for nothing in return; and your reward will be great, and you will be sons of the Most High. For He is kind to the unthankful and evil.” (Luke 6:35)

Perhaps the seeds of Christian faith are the best weapons to bring down terrorism. Perhaps it is not the guns or bombs, the aircraft or tanks, the ships or battalions of soldiers that will destroy Hell’s Gate. Perhaps it is the faith we should have in Jesus Christ. A faith that is not expressed in little red cups or military might. It is a faith that is fulfilled by teaching young men to play baseball.