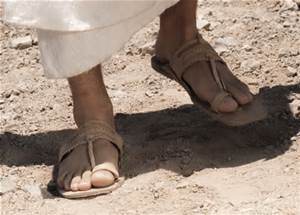 First steps are always the most important. They may not seem significant but taking that first step is a commitment to follow a path toward either a certain or uncertain future. Lives will be changed, destinies altered, and futures determined by whether or not that first step is taken. Still the wedding at Cana seems insignificant when compared to the greater miracles and teaching of Christ. Is it fair to say this was this a pivotal point for Jesus? Or was it a trivial side story that would be overshadowed by his other deeds? It was such an innocuous event and yet it may not have been just water that was changed, but humanity.

The other Gospels tell us of Jesus’ struggle in the wilderness and his triumph over Satan. Struggling against the rigors of the desert, suffering from hunger and matching wits with Satan made Jesus a heroic figure and demonstrated his fitness to lead. John did not mention this struggle but began his gospel with the witness of John the Baptist and the selection of Jesus’ disciples. So why did John use this story and what is the significance of the argument with Mary? In Jewish culture saying no to his mother seems petulant and disrespectful. But then giving into her undermined his authority in the eyes of Jewish society. No wonder the other writers choose not to tell this story.

The presence of Mary indicates that either a relative or close friend was getting married and that she may have had some official purpose at the celebration. Was she responsible for the wine? Not likely since there was a “head steward” or “master of ceremonies” who was accountable for such things. Or perhaps Mary wanted to save the young couple the embarrassment. When the wine ran out she expected her son to do something, knowing that he had some “special gifts”. After all having Jesus around may have come in handy in the past.

“Jesus your cousin John is coming over with his parents Zechariah and Elisabeth. Can you help with dinner?”

Though pragmatic, Mary was not God’s “favored one” because she was petty. She was the mother of the messiah and had a greater understanding of God’s purpose in her son. It was time he stopped hanging around with his new friends and got about his ministry.

John writes; “And when they ran out of wine, the mother of Jesus said to Him, “They have no wine.” Jesus said to her, “Woman, what does your concern have to do with Me? My hour has not yet come.” His mother said to the servants, “Whatever He says to you, do it.”[1] Though he had received the Holy Spirit from God, he refused to perform his first miracle saying “My hour has not yet come.” Was he being conceited, feeling such an act was not worthy of a man who had received the Holy Spirit from God? Did he want to wait till he had entered Jerusalem and perform a wondrous miracle before the temple, the people and the rulers of Israel?

He was human and human vanity was something he would have to struggle with, as we all have or should do. The fact that he was human is foundational to our salvation which Jesus purchased on the cross. There can be no salvation unless the life Jesus gave was human and not divine. And there can be no forgiveness of sin unless the human Jesus, not Christ, could overcome his own sinful human nature. He did overcome conceit in the wilderness when he declared: “Away with you, Satan! For it is written, ‘You shall worship the Lord your God, and Him only you shall serve.”[2] Except John didn’t have him in the wilderness, but at a wedding in Cana.

Perhaps this young man of 29 or 30 had known all his life that he was destined to die. His declaration to his mother that “My hour has not yet come” indicated that both he and his mother were aware of his impending death. He understood that a journey of hope and despair lay ahead. At the end of his ministry he was pleading, “Father, if it is Your will, take this cup away from Me…”[3] He and Mary both perceived that if he performed this simple miracle he would be committed to that dark future. So what ever held him back, conceit, fear, human nature had to be overcome by taking that first step, turning water to wine.

And it was his mother who pushed him to make a start. Mary, better than anyone, knew what her son was struggling with. For she could not forget when those good and simple shepherds had …”made widely known the saying which was told them concerning this Child. And all those who heard it marveled at those things which were told them by the shepherds. But Mary kept all these things and pondered them in her heart.”[4]. Mary must have been tempted to let the guest drink water and her son could shrink back into the crowd and return to his father’s business. She may have hoped that he would find a nice Jewish girl and give her lots of grandchildren. Let some other mother’s son bring salvation to God’s children and leave her with the son she loved.

Mary told the servant, “Whatever He says to you, do it.”

And so began the journey from Cana to Jerusalem. Near the end of that journey the disciples of Jesus are shouting triumphantly to the crowd as their teacher enters Jerusalem: “As he was now approaching the path down from the Mount of Olives, the whole multitude of the disciples began to praise God joyfully with a loud voice for all the deeds of power that they had seen, saying, “Blessed is the king who comes in the name of the Lord! Peace in heaven, and glory in the highest heaven!”[5]

However, in verse 39 and 40, being suspicious of this young preacher;

“Some of the Pharisees in the crowd said to him, “Teacher, order your disciples to stop.”

He answered, “I tell you, if these were silent, the stones would shout out.”

What a bold and defiant statement! His brashness would not endear him or his followers to the spiritual leaders of Israel. They felt compelled to defend their faith against this heretic who threatened age old traditions that had sustained the nation of Israel through strife, exile and persecution. The faith given to them through Abraham and the laws passed down from Moses were bedrock for their people Israel. They were not going to let this poorly educated carpenter’s son from Nazareth tear down the institution that identified them as God’s people. And certainly not one who made such statements from the back of an ass’s colt.

Jesus, a young man who had been unwilling to turn water into wine, now entered Jerusalem a hero. Yet he knew before the setting of the sun on Friday he would be hanging dead on a cross. And in five extraordinary days, this young man who refused to turn water into wine, would heal the blind and the lame, shame his accusers, defy the power of Rome, cleanse the feet of those who felt unworthy and share a simple meal with those he loved. And he did none of these things because he was almighty and powerful or regal and proud, or judgmental and sanctimonious, or because he was God. He did them because he was small and weak, compassionate and humble, kind-hearted and loving. He did these things because he overcame his doubts and took the first step.

So as his disciple shouted “Hosanna” and declared the “… the king who comes in the name of the Lord”, let us declare to a needful world the compassionate Jesus, the humble Jesus, the loving Jesus, the human Jesus. It is critical for both believers and non-believers to understand that it was not the Son of God who died on the cross but the Son of Man. And that salvation was paid for with human suffering and human blood. Unless we fully realize his fear, his doubts, his anxiety, and his suffering we cannot receive the gift of the Holy Spirit and receive God’s love. “Most assuredly, I say to you that you will weep and lament, but the world will rejoice; and you will be sorrowful, but your sorrow will be turned into joy.[6]

For all of God’s children who have suffered, Jesus also suffered. And before the end of all things the world will know the price God paid for our salvation. And the world will know because we who felt the pain of Christ’s death and the joy of His resurrection shall, like the stones, shout it out.

But will we? Or will we sit and listen to the music, declare our faith and insist that our time has not yet come? It seems sacrilegious to call Jesus fearful but we cannot deny that fear has a grip on the modern church. We may be afraid to risk what we have and are satisfied with holding on to what we have gained.

I often wonder how to get my congregation to take that first bold step that could change the destiny of our church. Does it take a wilderness experience which pushes them to the edge and force’s a church to call upon faith to take that first step? Does it require something that dramatic and powerful to jumpstart our journey of faith and renewal? Or is a gentle nudge from a caring person all that is needed to begin the journey? Asking someone to witness to their faith or tell of their mission trip may be what is needed. Persuading a young couple to take the Walk to Emmaus or simple having a conversation with one person may be what sets and individual or a church on the journey toward God’s Kingdom.