Grace: A Choice or Predestined? 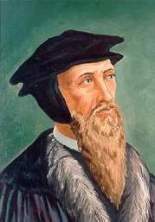 At the beginning of the Protestant reformation, England’s King  Henry VIII declared himself head of the Church of England and used the Parliaments to enact the laws ruling his new church. John Wesley, founder of the Methodist Movement,  grew up in a nation in which the monarch still ruled over the church and church laws were still determined by a secular political body. In the two hundred years between Luther and Wesley’s emergence as a notable theologian, the English church had endured a long tumultuous episode of conflict, civil war, government revolutions, and problematic monarchs. Though Protestant in its doctrine the English faith was a mixture of residual Catholicism and Cromwellian Puritanism incorporating the theology of Martin Luther, John Calvin, Thomas Cranmer,  John Wycliffe,  and others.

At its core the church was still a state sponsored religion which promoted the political agenda of the monarchy and parliament. Though a democracy, England was a stratified class society and the church reflected this status by ruling from the top down. To Charles and John Wesley it seemed the church was focused on the national agenda and the upper class rather than the spiritual salvation of the population. In many respects the Church of England had fallen into the same mindset of the Roman church which the protestant reformers had challenged two centuries earlier. It had become invested in self-preservation and theological dogma rather than the spiritual and human needs of the people. Author Randy Maddox states about John Wesley in his book, Responsible Grace: John Wesley’s Practical Theology  “…the quintessential practitioner of theology was not the detached academic theologian; it was the pastor/ theologian who was actively shepherding Christian disciples in the world.”[1] It was this desire to make the ministry of Christ applicable to the common man that caused Wesley to develop a worship by which salvation and Grace could be effectively infused at every level of society. Theologian Richard Heitzenrater states in his book,  Wesley and the People Called Methodists. “The long course of English ecclesiastical history met the force of a new concern for renewal, both individual and institutional. A long tradition of propositional certainty of faith met the power of a personal experience of faith. An institution built by and for the establishment met a concern for the souls and bodies of the disenfranchised.”[2]

The Methodist movement emphasized the importance of a personal relationship with God by experiencing Grace and salvation through Christ. Wesley explored and advocated several ideas promoting this relationship which meant he also had to rebuff some doctrine of Luther and Calvin. The foremost doctrine to be rejected was divine determinism or predestination. Both Luther and Calvin declared that by determining who was already saved by God’s Grace, God had established his sovereignty in the world, that his judgment could not be questioned or altered.

John Wesley took to heart the teachings of Dutch theologian(1560-1609) who challenged Calvin’s theology of unconditional election and irresistible grace. According to Richard Heitzenrater, “Both Luther and Calvin had asserted predestination as a basic belief: that God chooses those to whom salvation will be given, and that persons can do nothing to earn this gift— the only human action that is possible is for those who have been chosen (the “elect”) to respond in faith. Arminius challenged this view that implied that Christ died only for the elect; his view of “universal atonement” (Christ died for all) centered the question in the human will— those who chose to respond in faith and his view of accepted God’s gift of grace would be saved.”[3] By denying “predestination” and advocating Arminius’s “free will” theology, Methodism allowed all people to receive salvation through the cross. People do have a choice to accept or reject God’s Grace because Grace is given to all people, not just the “elect”.   John Wesley believed that people are empowered to do good works by grace and not because they have been preselected to do so. Thus it was possible for all people to receive grace and do “good works”.

In emphasizing the personal and universal nature of grace through salvation, Wesley turned to the teaching of Jacob Philipp Spener and the Pietism movement that had emerged from Germany. According to Heitzenrater, “The most significant theological consequence of the Pietist influence was Wesley’s discovery that holiness was an inner reality—“that true religion was seated in the heart and that God’s law extended to all our thoughts as well as words and actions.”[4] Wesley believed that God’s words are intended to be given to each individual rather than be filtered through institutions. By rejecting predestination, each person was free to accept or reject the gift of Grace. Free will acceptance of grace meant that discipleship was a genuine, sincere and willing act of faith in response to God’s Grace.  “This program generally attempted to refocus the center of religious sensitivity upon the heart rather than the mind. German Pietist theology, as seen in such writers as Spener, August Hermann Francke, and particularly Nicholas Ludwig von Zinzendorf (patron of the Moravians), would become characterized as “heart theology.””[5]

Largely influenced by Pietism, the Methodist movement created a doorway for laity of all class, gender and ethnicity to encounter God and become disciples. However, misogynism, racism and homophobia proved problematic in the past and today. Methodism laid the groundwork to include all people to participate in building God’s Kingdom that will be built from the laity up, not from the institutions down. By transforming the heart of the people to willingly follow Christ rather than an obligatory duty to the institutions of church and state, Wesley widens the gateway for both salvation and transformation. Hopefully the modern church has not shut that door.